In my quest to declutter, I have identified a pile of stuff that I want to sell or give away. One of the items is a wristwatch in mint condition. It was part of a “best paper award” that I had gotten in 2012. I didn’t like the style, so it sat around, unboxed, in some drawer all those years.

The watch itself is nothing special: The online asking price is 132 EUR right now. I thought: Let’s try something new and give it away for free. So I listed it on an Austrian website for selling used goods as a “for free item”. What happened next is beyond my imagination.

The first guy who I was in contact with, and who had agreed to pick it up at 8 pm, only told me at 7 pm, after I tried to reconfirm the pick-up, that he lives in Vienna and it’s too far for him to come. – Keep in mind the platform clearly tells you where an item is: Address, google maps, everything.

The second person just did not show up, no response.

The third person did not respond when I tried to arrange time and date for a pick-up for 48 hours (the platform reported my messages as “read”).

The fourth person finally asked me to bring the watch to a specific location.

I am blown away by how much effort, how much time I spent on this endeavor! I have a feeling that as soon as something is “for free” people perceive it as “has no value”. Especially online it’s easy to hit the “I want it” button on things that are 0 EUR. But then, when these people have to actually do something to get that “worthless” piece, they are not prepared to do their part. Lesson learned: If you want to explore the abyss of human nature try giving something away for free online. Otherwise don’t do it.

Here’s how the story ended: I agreed to send the watch to one of the many people who had contacted me. I paid for the postage (5 EUR) and asked him to do something good for someone in his neighborhood. I think that way I sparked a little niceness in the world and did not have to spend any more of my precious time dealing with people who did not value a 0 EUR item.

A couple of years back I did a website for a friend of mine, which I blogged about in The Making of Haraldbaumgartner.com. We did a couple of updates since then, but there haven’t been any changes over the past three years or so. Moreover I neglected updating the software behind the website, so it was still running off Joomla version 1.7.

About a week ago the provider disabled PHP 5.6, which Joomla 1.7 depended on, so the website was broken. It also meant that there was no path for automated upgrades any more.

After some brainstorming I had found my solution: I decided to recreate the setup that the provider had disabled (Apache, PHP5.6, mysql) in VirtualBox. All I had to do is to

Tada, the website was up and running again on my local machine: 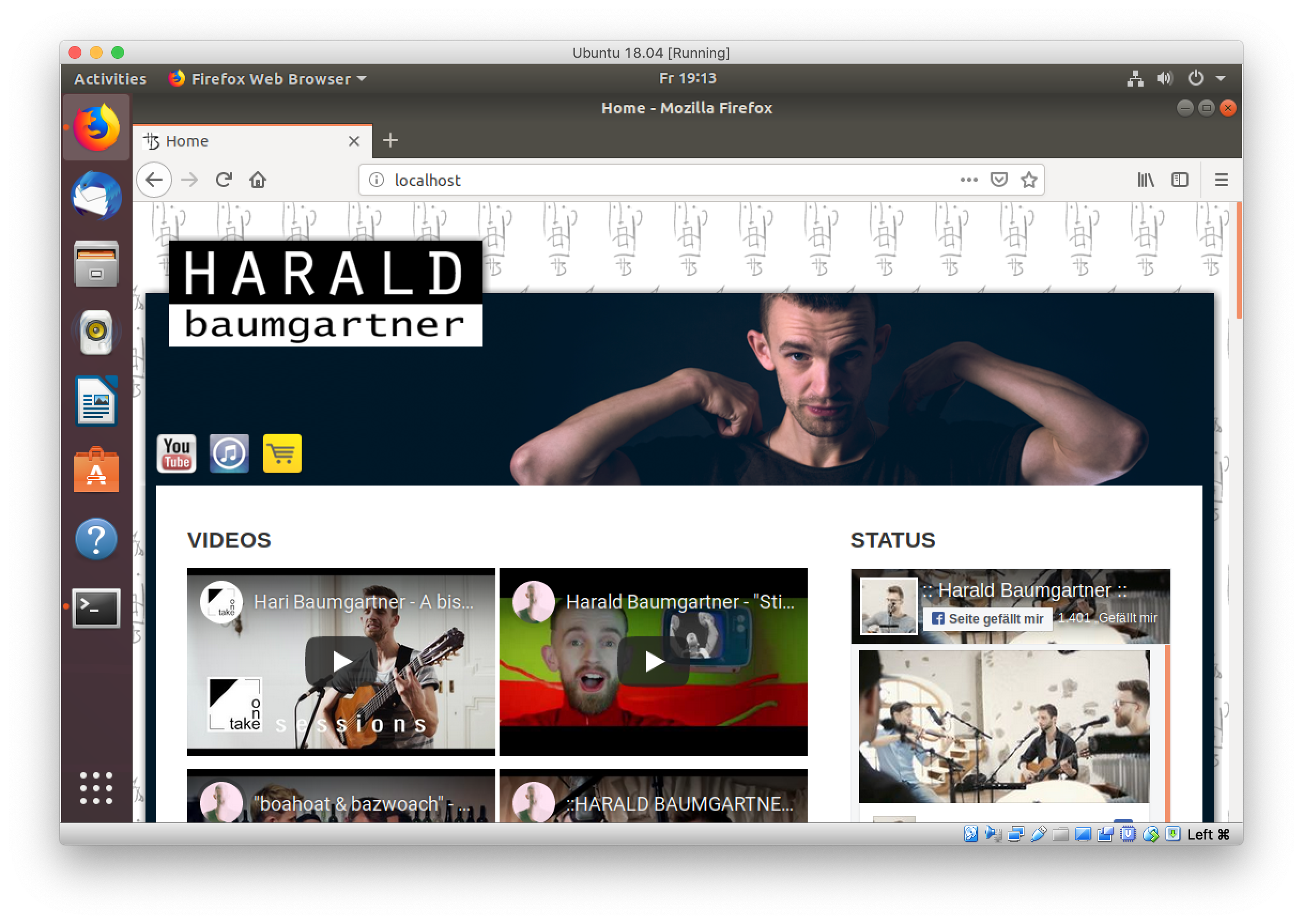 With this in place I could restore all the stuff I nedded and migrate to Joomla 3.9. Finally http://www.haraldbaumgartner.com/ is back online! On the way there I also fixed all the file permissions, so that in the future Joomla would be able to update automatically.

This is an apology to all the people who have sent me an e-mail over the course of the past 5 months and have not received the response they expected in time. I was swamped at work, with my PhD project, IEEE activities and other challenges in my private life. But now I am on top of things again. I’ve reached “Inbox Zero”.

With it comes the “Mind like Water” state and I am now ready again for your e-mails. Let’s see how long it lasts ;)

jdotxt is an open source, cross-platform Desktop tool for managing your todo list. It’s geared towards Gina Trapani’s todo.txt file format and stores all of your stuff in two human readable text files. Having these files on your owncloud, dropbox or any other cloud storage makes it easy as pie to keep your todos in sync across multiple devices.

You are more than welcome to drop me a line via one of the online platforms I use, or to contribute by reporting bug reports or feature requests via github. The source code is also hosted on github.com so feel free to contribute!

jdotxt is free software: you can redistribute it and/or modify it under the terms of the GNU General Public License as published by the Free Software Foundation, either version 3 of the License, or (at your option) any later version.

This program is distributed in the hope that it will be useful, but WITHOUT ANY WARRANTY; without even the implied warranty of MERCHANTABILITY or FITNESS FOR A PARTICULAR PURPOSE. See the GNU General Public License for more details.

You should have received a copy of the GNU General Public License along with this program. If not, see http://www.gnu.org/licenses/.

I wish you and your loved ones all the best for 2015! Hope to see you again this year!

Public-Key Cryptography is a truly magical thing and I often wonder why we don’t use it more often. We go on and complain about how it is too easy for government agencies to look into our digital lives, while we do have all the tools to prevent it. Only we don’t use them and we don’t seem to ask facebook, gmail and so on to use them – not that they would. The funny part is that it would not require a lot of effort, because computers could automatically do all of that stuff in the background. All that would be needed is that we were able to securely store one, long password (the private key).

In a nutshell public-key cryptography is a mathematical concept that allows us to encrypt a message that is intended to be read by just one person and to sign something to guarantee that it really came from you.

Let’s take a closer look: public-key cryptography is based on a pair of keys, lets call them #1 and #2. When one uses key #1 to encrypt a message one can only decrypt it again using key #2. The same is true for a message encrypted with key #2 – it can only be decrypted using key #1. In other words the two keys are kind of reversible operations that work in both directions. For instance

In addition to that it is important to know that it is (almost) impossible to find the keys from the Plain text and/or the Cypher Text.

Usually a person or entity (lets call this entity Alice) creates a pair of keys, where one is made public (the public key) and where the other key is kept secret. There are two typical use cases:

The secret key is Alice’s crown jewel that she must not lose or share with anyone, because anyone in possession of the secret key can do what Alice can do. Well that is why it’s called the secret key.

Again, all of this can stay in the background and as it can be done for you by software on your computer/phone/…, that has access to your locally stored secret key. If you are interested in implementing some of this stuff in your life, you might want to take a look at

Just by reading this article and by understanding it, you should have a pretty good idea about what level of protection encryption can give you and where potential problems may lie. Again, never forget: your secret key is your crown jewel that you must never share and that your software must never leak. By the way, this is something that is especially hard to check with closed source software and also something that the heartbleed bug may have caused.

About two years ago I blogged about setting up the website of Austrian singer Harald Baumgartner. In an attempt to make his work more well known to the public he’s now part of a reality television-music competition series called “Herz von Österreich” (“Heart of Austria”). It’s only airing in Austria, so you might not have heard of it, it’s similar to the Idols TV series. – As I don’t watch television, I didn’t know about it either until he called me last week.

The show in which he’s going to appear is going to air this week on Friday and so some updates to his website became inevitable. I guess that’s the kind of stuff you’re supposed to do on an idle Sunday afternoon. Helping an old friend.

See for yourself http://www.haraldbaumgartner.com – and please don’t forget to vote for him on Friday.

I did some statistics a while ago. Today I can give you an updated version. My term as IEEE Region 8 Student Representative lasts for 388 days now and on average I have received about 18 e-mails per day and I have sent out about 3.5 e-mails per day. – My work and private e-mails go through different accounts, so that is just the IEEE stuff.

Other mail goes into project related folders unless it requires some action that I am for some reason not willing to put on my todo list. In that sense my Inbox is also a kind of todo list, which should be as empty as possible. From time to time I fall a little behind, so it was time to do some serious housekeeping today. 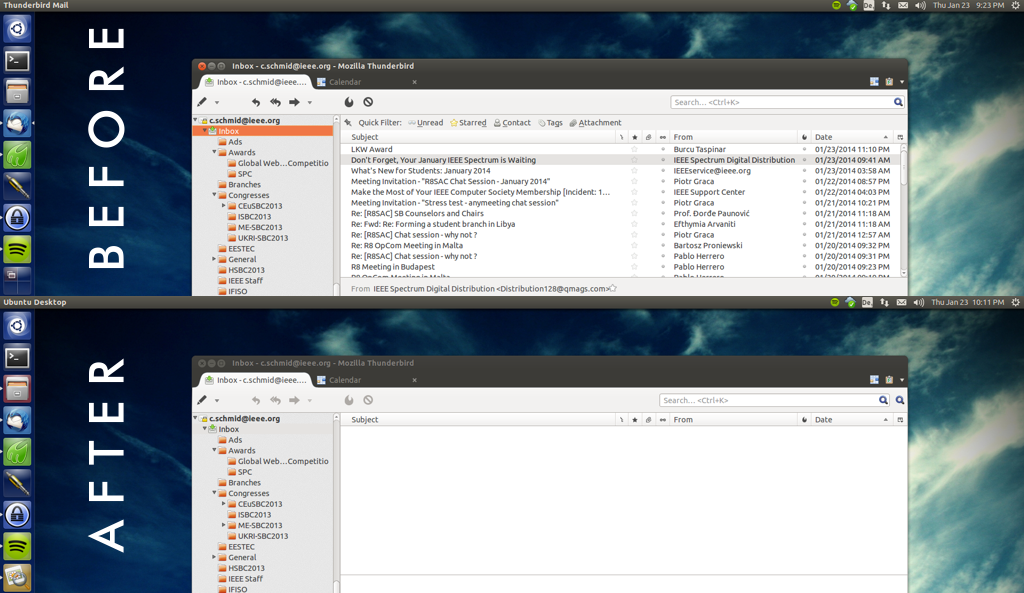 We had the very first IEEE Region 8 SAC online chat session this year. About 40-50 participants from all over Region 8 (Africa, Europe, Middle East, Russia) dialed in. We (Piotr, Femia, Maciej, Rui Costa) tried to give them an update on

I guess there are a lot of exciting things coming up in 2014. Some people started sharing screenshots from the online session on facebook. I can’t resist to share with you the screenshot of this pink desktop by Christine Avdikou. 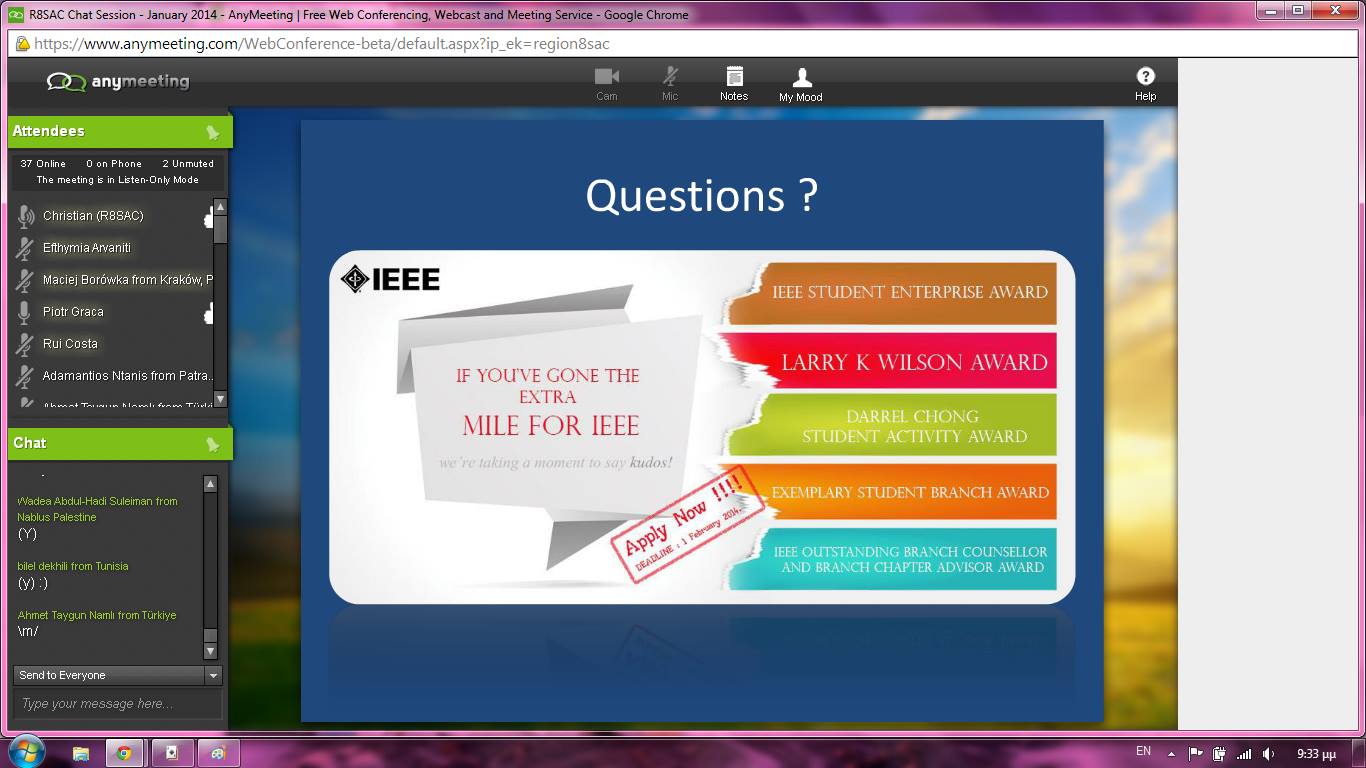